Dare to be disliked 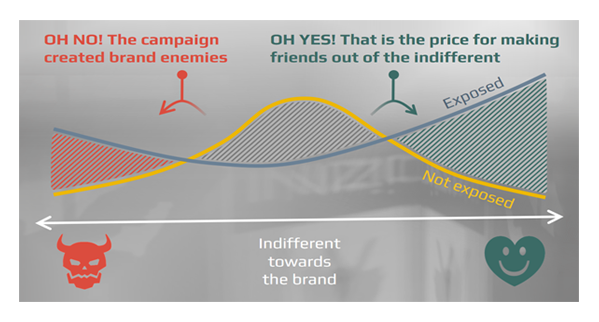 We do tons of brandlift measurements. Is the brand consideration higher in the exposed group than among the non-exposed? Did the campaign create awareness? Does preference increase with exposure to our ads? Do those who are prompted by our commercials buy more?

Yes. Good campaigns create brandlift. Bad campaigns don’t. It is no mystery. In the digital world it can easily be measured. And when slicing against our benchmark data cloud we find some campaigns work early in the funnel, creating awareness and knowledge. Others operate at later stages, driving purchase intent and action. Most campaigns don’t do all at once.

One pattern however is applicable across the board: true success requires some sacrifice.

Imagine if you could divide your market into three groups:

A good advertising campaign is one that makes more people like you. Eh …d’oh!

In most instances that only happens with campaigns that sticks out to the point where some recipients start disliking you more. And after all, it is more profitable to push some of the in-the-middle group towards starting to like you, than to push some of your dislikers into the middle. Even though the brandlift, when comparing averages, is the same. The in-the-middles are not gonna come running towards your cash register anyway.

So, the moral of the story is, don’t be so afraid if your advertising (its content rather than its frequency) creates a few enemies. At least they care enough to have an opinion. If everybody is fine with your brand being around but nobody loves it, that is when you should be afraid.

iPhone wouldn’t have been such a bestseller if it weren’t for some people’s open IOS resistance. Mercedes-Benz would have been less profitable if the brand was middle of the road (pardon the pun). Knowing this formula gave Trump the presidency. The list of examples is endless.

And most importantly, this is not just somebody in advertising stating a belief. Data supports this. The graph above shows a pattern identified across thousands of brandlift measurements: the most successful campaigns caused uplifts in line with objectives – awareness, attitudes, action etc – because they were courageous enough to accept that in order to be liked by many, they were going to be disliked by a few.